Or at least trying.

Who am I kidding.. I’ve been in complete grouch mode since I got to Arequipa, Peru. After a serious of delayed flights, I arrived at my hostel in Arequipa 15 hours later. The first night I caught up on sleep and woke up early to see Arequipa the next day. 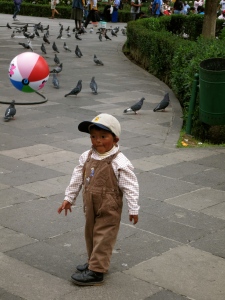 Arequipa, nicknamed “The White City”, is situated in Southern Peru at 2,335 meters or 6,561 feet. Arequipa is a major tourism destination in Peru, only because it serves as a launching point for the nearby Colca Canyon, which is the only reason I came here. 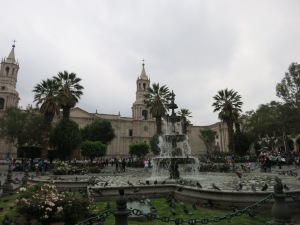 Seems more gray than white to me, but what do I know

OK so Arequipa isn’t super impressive alone, I approach the tour desk at the hostel to inquire about the 3 day/2 night trek into the Colca Canyon. $120 soles plus $70 admittance into the park, so a whopping $72 USD for three days?! Sweet. Fortunately for me I was feeling lazy and decided to hit up happy hour instead of paying for the trek right away. For once my laziness helped me out a bit.

After two beers (yes only two) I headed upstairs to Face Time with Ben (my boyfriend) and read some. I was the only person in my four person dorm, and I was in a top bunk. I seriously considered moving to a bottom but was feeling lazy (again) and decided against it. FAIL

2am rolls around and I climb down the bunk bed ladder to go to the bathroom, because my bladder is pea sized apparently. Missing the last step in the dark, I come crashing down landing on the bone in my ankle. I hear and feel a pop and my ankle erupts into sensations of pain I’ve never felt before. I’ve rolled my ankle several times but I’m embarrassed to say that most have been while intoxicated. This is what rolling an ankle feels like!

For reasons of common decency and to avoid sounding like white trash, I won’t repeat the string of words that happened next. Thankfully a maid at the hostel heard shouting and came into my room.

Shit.. she doesn’t know what ice is. I know the word for ice, why the F*&@# can’t i remember it? She looks at my swelling ankle and turns her head away in disgust then asks in Spanish if I want some cream.

“Cream, what good will that do?”

Thank god this lady doesn’t speak English or she would probably tell me to eff off and leave. After all it’s 2 am and she’s trying to help me. After sliding on my butt over to my Spanish dictionary I find the word for ice.. HIELO DUH!

Once again I’ve discovered my problem with Spanish. I’m fine speaking it until I’m in a stressful or bad situation then all I can do is mumble in English to myself.

One (tiny) bag of ice later and I’m propped on my bed cursing to myself. Great, I’m now stuck in Peru unable to put any pressure on my right foot. Bye bye Colca Canyon, Bye white water rafting, bye bye Amazon rainforest. What in the hell am I supposed to do in Peru now? How am I going to walk around Machu Picchu next week? I pop some Advil and an Ambien and astonishingly fall asleep in minutes.

Thankfully the next morning my ankle, although swollen to the size of an orange, doesn’t hurt as bad. I sit by the pool while icing it for a few hours and realize I’m going to have to get muletas (crutches) to even go anywhere. Did I mention my room is upstairs?

After a few guys at the hostel asked around at local pharmacies for me, I learn I’ll have to go to the hospital to actually get muletas.

And so begins the adventure to the Peruvian hospital.

$5 soles later I walk into a “hospital”, which is really a tiny building with a bunch of nurses crowded around a tv watching telenovelas. I’m quickly escorted into the “doctor’s” office, and after some painful poking of my ankle he sends me away to a real hospital for x-rays.

And so the gringa hops into a Peruvian hospital and everyone stares. Again because my bladder is pea sized I hop into the bathroom to find no toilet paper or hand soap. Isn’t this a hospital? I miss Colombia.. this would never happen in Colombia.

No toilet paper or soap.. in a hospital? Welcome to Peru you snotty first world gringa

15 minutes after being ushered in for x-rays all while I receive a mixture of glares and curious glances at my HUGE ankle. All of these poor souls have waited for God knows how long, and I walk right in.

The advantages of being a gringa in Peru

After x-rays the nurse takes me back to the doctor’s office in a taxi. After looking over the x-rays he calls in a “specialist” (which coincidentally charges me $100 just to walk into the room and look at the x-rays) who shows me something that I guess is an “incomplete fracture”. As he begins asking what sort of cast I want, I realize it.

Do I actually need a cast I ask? Something tells me these guys are just ripping me off because I’m a “rich gringa”. If they only knew..

6 hours and $450 later, torn ligaments and fracture later, I have a cast halfway up my right leg and two really f’n uncomfortable crutches. 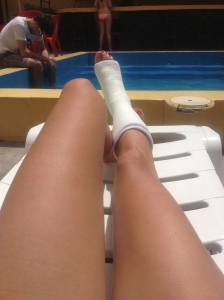 After a day spent in a haze of pain pills and borderline depression, I’m done feeling sorry for myself. But what do I do? How can I travel around Peru with a 30 lb backpack and a heavy purse alone?

Do I call United and head home early? Do I make other plans and go somewhere easy to get around? Where exactly is that in Peru?

I can’t hike Colca Canyon, sandboard or sand buggy ride in Huacachina, can’t white water raft in the Sacred Valley. Not sure how I’ll hike around the Amazon rain forest with crutches.

What should I do?

I don’t want to ask for “a break” because honestly a fracture is enough for me. On Friday night I’m taking a 10 hour overnight bus ride to Cusco, where I’ll meet my boyfriend to attempt Machu Picchu. After that I’m not sure what I’ll do.

As for now I’m going to leave the hostel for the first time since Tuesday to attempt to see something here. Maybe after that I’ll attempt to procure a garbage bag and tape so that I can shower, wiping myself down with hand wipes and constant application of deodorant isn’t cutting it 🙂

If you exist, can I please trade this cast and crutches for another stomach virus and missed flight? I promise not to complain again.

4 responses to “Staying positive in the face of adversity”