After a failed removal attempt my at removing the 6 stitches with sanitized fingernail clippers and tweezers on Wednesday,  I decided to wait until we arrived in Medellin. We’d walk into a hospital or clinic and just pay, since I’ve yet to pay a dime for this injury.

I’m not sure why I thought it would be that easy.

In lieu of actually seeing any tourist attractions in Medellin, we walked into Clinica Medellin with a rehearsed script of Spanish.

“Hola. Tengo suturas que necesito eliminado.” I said with a smile to the ER receptionist.

A scowl comes over her face as she stares at us. This happens to me often in Colombia, people who assume I’m Colombian are confused by my broken slow Spanish.

Damn you broke gringo backpackers is what the look on her face seemed to say. We leave downtrodden after she explains we need a doctors note for stitch removal, which is obviously impossible given the fact that we’re 1,000 miles away from the Machachi doctora who could write a note.

As we walk around the building, Ben and I split up to begin asking anyone who looks like they work in the medical profession. As I wait in line at the farmacia Ben comes in and moves me along to the next door lab building.

After explaining my situation the young extremely nice lab technician goes into a minute long diatribe from which I only dichiper “Go back and tell them you’ll pay”, which seems redundant and just silly.

Thanking her we walk back into the Clinic and do as we’re told. We take our seats and no more than 10 minutes later I’m shown into a real hospital room, complete with fancy curtains that divide the beds and hygenic paper on the beds. A nurse comes over and after taking a look tells me no problem and not to worry, probably noticing my shaking hands.

A minute later the stitches were removed and I was walking back into the waiting room, where Ben was engaged in conversation with a nice older Colombian lady. The receptionist signals that I’m good to go. I ask what I need to pay.

Once again I pay absolutly nothing. Take that America! 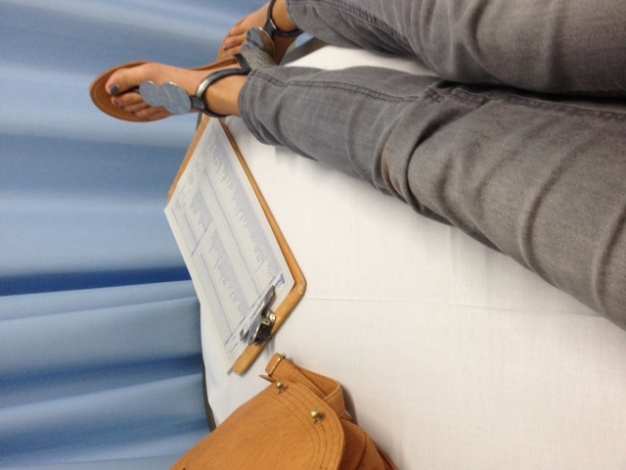 Why was I turned away in the first place? No one knows.