I wasn´t in the best mood when we arrived at the Ecoyoga farm near the small pueblo of Guyabito, Colombia for our first workaway. Maybe it was the 13 hour bus journey from Medellin or the headache I’d struggled with for 7 hours. Or maybe it was the crazy local cab driver who managed to get us into 2 minor accidents in the 30 minute cab drive from the bus station to the farm. 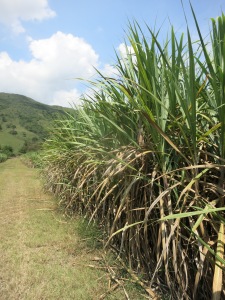 But whatever the reason, I was less than thrilled when we arrived at the Hare Krishna yoga farm. After being shown to our bed we were informed that the power was out and as a roach scattered from under the bed I was not looking forward to the next week.

After a candle-lit dinner huddled together with the other volunteers on a dirty rug, I counted 13 bug bites on my legs. Although I didn´t mention it to Ben, I began thinking of ways to get out of this place early. “Cats” I thought “They have cats and I´m allergic to them”. Strangely enough after the first night the cats didn´t really bother me much.

After an ice-cold shower spent dodging roaches and a spider in the bathroom we had a restless night´s sleep under the mosquito net that smelled strongly of garlic. The garlic odor seemed ironic to me, since Hare Krishnas avoid eating garlic or onions based upon the belief that they activate the lower chakra which provides sexual energy, and sex is allowed only for procreation purposes. Yet another reason the next week would be tough: vegetarian food without garlic or onion, no alcohol, no internet or tv, and finally no sex.. more like “No fun EcoYoga farm”. 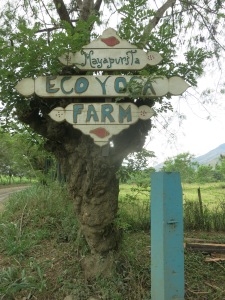 Our home for the next week?