Our visit to Borobudur, the world’s largest Buddhist temple, made our time in Java worthwhile. In lieu of waking up at 3am and hopping on a tourist bus, we booked a shabby little hotel next to the East gate of Borobudur and walked over at 5:45am.

While eating dinner at Lotus Guesthouse we met a chatty and informative guide named Johnny and hired him for the following day. So after our 6am sunrise photo session atop Borobudur, we met Johnny and began “class” as he called it. Five hours later we left Borobudur knowing much more about Borodudur as well as Indonesian history and politics.

Yes those are the mandatory sarongs 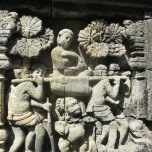 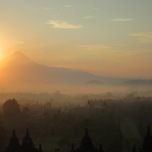 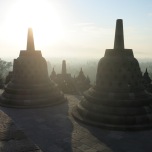 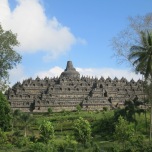