When Ben reserved the trailhead back in April, I immediately began searching for a challenging loop which ended somewhat near our car. Luckily for us Tuolumne Meadows offers several loop options to choose from.

We completed this 40 mile loop starting out on a Monday, ending midday on Friday. Four nights in backcountry was by far my longest, my challenging, and best backpacking experience.

Day 1- Nothing is easy in Yosemite

Starting at the Lyell Canyon trailhead we powered through the first flat 6 miles with thunderstorms threatening in the distance.  A mile into our climb to Evelyn Lake we were hit with a hail storm which turned into rain and continued for the next 4 hours. Continuing on in the rain, temperatures dropped and I was made aware of just how ill prepared I was for the beast that is Yosemite.

Several websites described this trail as “nothing special”. I beg to differ

The only warm jacket I had doubled as a raincoat, which was now soaked. While getting the tent set up on wet pine needles I could see the worry in Ben’s face grow as he tried to get a fire started with mostly wet wood as the cold began to creep in. The uphill battle finally pays off after ~20 minutes, and as we sat next to our puny but warm fire the smiles returned to our faces.

We left camp in a hurry as a swarm of mosquitos threatened to carry us away. A mile of climbing carried us past Evelyn Lake to above the tree line through a spectacular alpine meadow. After our first of many “shoes off” river crossings through water so cold you have to sit to catch your breath, we began to encounter the snow fields the ranger warned us about on the trail to Vogelsang High Sierra Camp. 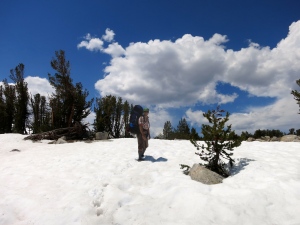 The first half mile of the trail I enjoyed stepping through the snow until the snow grew softer and slippery leading to unsure foot placement and several nearly twisted ankles. As we approached Vogelsang I breathed a sigh of relief in the assumption the worst was behind us. But as we passed the now closed High Sierra Camp and got a view of the trail over the pass towards Bernice Lake, my anxiety returned as dark clouds and thunder once again loomed in the distance. Had the slush-like snow and the threat of rain and lightning not been present, I would have loved to relax and eat some lunch while taking in the gorgeous view of Vogelsang Lake.

After hiking through the snow we were unable to find the trail and ended up scrambling down some rocks into the valley below. Later as I was describing this day to my friends Ben said was I exaggerating how scary the rock scrambling was and even during the hour we spent moving down the rocks he stayed very well put together. While I stayed positive, make no mistake I was shaking the entire way down.

As an avid skier, the “fall and you die” scenario is all too familiar to him. Risk taking is second nature for someone who goes heli-skiing in Alaska. Reassuring me every move I made down the rock as the thunder threatened we made our way down.

That night although we slept a few miles short of our goal of Bernice Lake, but I slept better knowing that I conquered something that scared me.

After only completing ~16 miles the first two days we needed to pick up the pace to complete our 40 mile loop by Friday. We left camp around 8 am and began the slippery decent to Merced Lake. What I calculated to be an easy 4 miles turned into a 4 hour muddy and steep trail and as we stopped for lunch at Merced Lake, we were again reminded that there’s really no such thing as easy in Yosemite.

Feeling good as we charged on, 10 hours into our day we began to doubt we were on the correct trail. After running into a man on the trial we learned we mistakingly took the Cathedral Trail and “close” to Sunrise.  Needing water and a flat place to sleep we dragged on the rest of the way and set up camp near the beautiful Sunrise meadow as the sun was going down.

With only ~11 miles left and two days to complete it, we were on easy street! I wanted to have a relaxed morning but the swarms of mosquitos weren’t allowing that. Dripping with sweat from wearing two layers of clothing to prevent mosquito bites in 70 degree weather, we rushed out of Sunrise as fast as possible. The constant buzzing in your ear is enough to make anyone lose their minds.

Thankfully the hike to Cathedral Lake was less than 6 miles because I was on empty. Gulping down water and snacks for energy didn’t work. When we arrived at Cathedral Lake I was happy to take my pack off and relax.

This was by far my favorite camping spot of the trip but we weren’t the only ones who felt this way– several other groups of people camped there also ending our backcountry streak of solitary camping.

On Friday we walked quickly to Tioga Road in anticipation of burger and cold beer. A mediocre IPA never tasted so good!

I learned from a Native American friend that it’s legend that the name Yosemite means “a killer among us”.  After this epic backcountry trip through Tuolumne Meadows I now understand just how special and unforgiving Yosemite can be. Embarking upon a 40 mile loop in the high country this early in the season presenting many challenges including snow, raging rivers and scary river crossings, and mosquitos.

Yosemite is a spectacular and sometimes treacherous place who certainly does kill. I was reminded constantly throughout our week here that we are all at the mercy of nature. In Yosemite dangers are much more evident and swift– it’s not uncommon for someone to go missing in the backcountry or to be swept from a river bank to their deaths. But is Yosemite really the killer and to blame for these deaths, or are bad human decisions to blame?

PS- If any WordPress pros are reading this I can’t seem to figure out why the spacing is off after the pictures and could use some help!

One response to “Yosemite- “A Killer Among Us””