Olympic National Park is a g 922,651 acres park on the Olympic Peninsula of Washington. The NPS website boasts “Three Parks in One”, and while I tend to take these claims with a grain of salt, I really must agree in this instance. With roughly 3 million visitors a year it ranks in the top 10 most visited parks in the United States, and for good reason. Within a short drive from Seattle, Washington this park really has something to offer everyone.

We drove into Olympic on Sunday after visiting Seattle for the weekend. After doing a little research on the park we stopped along the coast at Kalaloch campground, which is touted as one of the “must visit” areas. Let’s just say I shouldn’t believe everything I read on the internet. Being the only reservable campground in the park, nearly all 170 of the spots were taken. All except for one tiny poorly arranged camp spot right next to the highway.

After a night of terrible sleep we drove an hour north to Mora campground to escape the crowds, and found the camp ground nearly empty. The heavily wooded and spacious campsites were reminiscent of our campsite at Del Norte State Park in California.. just with smaller trees.

Our spot in the Mora Campground. Roomy!

In one day we hiked along the Hoh River in the Hoh temperate rainforest then drove less than an hour to spectacular Ruby Beach along the rugged Olympic coast. After carrying a crashpad around for a month we finally got to use it to do some bouldering at 3rd Beach and Ruby Beach, although Ruby Beach was a little too scary for me to partake in. As a bald eagle flew overhead on the beach and as German tourists stopped to take photographs I couldn’t help but liken Olympic National Park and its variety to our great country. Although we haven’t even left the Pacific Northwest, we’ve already seen so much variety. From 37 degree weather and snow at Crater Lake, to 100 degree weather at Lake Chelan in Washington; from the redwoods of the Northern California coast to the sand dunes of Southern Oregon– our country really has a lot of gorgeous scenery to offer visitors.

We spent our final two nights in the remote Deer Park campground, which I’m now adding to the list of favorite campgrounds of the trip thus far. Although the ~45 minute drive up a windy 18 mile partially dirt road seemed tedious, the gorgeous views of the Olympics from our camp spot made it worth the effort. Rightfully named, as we discovered because its crawling with deer. Like the annoying squirrels that try to steal your food in public parks, the deer of Deer Park just won’t give up. Our dog Lexie had fun chasing them away the first few times, then just gave up. 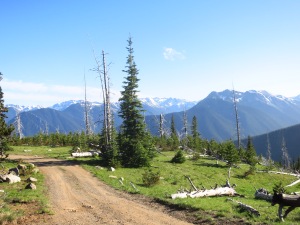 All in all Olympic was one of my favorite places we’ve visited thus far. The only downside of the park is that of the 16 campgrounds there are no showers. Add “sneaking into a state park to shower” to the list of things I’d never thought I’d do 🙂