It’s 11:30am and after waking up at 5am and taking two ferries from Orcas Island, Washington Ben and I arrive at the Canadian border in Victoria, B.C. Our car is jammed to the top with bags, camping gear, and a furry dog who would prefer to sit atop all of it than to be in the very back away from us.

Canadian Border Patrol: “What do you two do for work?”

This is where it gets tricky since technically neither of us currently have jobs.

Ben: “I work in Finance and my girlfriend in Advertising.” Ben explains.

Canadian Border Patrol: “So you guys are on vacation eh, when do you have to go back to work?” the female border patrol agent asks.

Do we lie or do we tell the truth?

Ben: “Well we actually both quit our jobs to travel.” Ben explains in a nonchallant manner.

Canadian Border Patrol: “So you don’t have jobs? What about a home? Do you own or rent a home currently” she asks beginning to look at us warily.

Ben: “Well no, because we got rid of everything to travel for a while.”

Canadian Border Patrol: (as she places a yellow ticket under our windshield wiper) “I’m going to need you to pull aside please.”

As we pull aside we sit in parking space number four exchanging anxious glances at each other. It may have been the three cups of coffee that morning, but I was feeling very jittery. You should have lied, I told him. “I know, but I really don’t have anything to hide and we’re not doing anything wrong” he says. I feel like I’m on an episode of Locked Up Abroad, except we really have nothing to hide– well maybe the bear spray and a piece of firewood we didn’t realize we had. As we sit there I think of every possible thing that could somehow have gotten left in the car and I get REALLY nervous. I know people who’ve been arrested for a tiny bit of marijuana found under a car seat, which no one knew was there.

Shortly after a really nice middle-aged male Border Agent walks up to our car and asks the same questions.  Once receiving the same question he begins asking financial questions then asks us to get out of the car. After going through my purse piece by piece he moves onto the car, and I sigh in relief that he didn’t open the plastic bag which contained a pair of dirty underwear. AWKWARD! (don’t ask.. when you live out of your car dirty clothes end up in many different places)

After opening the Thule gear box on the top of the car and seeing it all appeared to be camping gear, one agent pulls the main aside and points at something in the back of the car. From what I can guess they found our “important bag” containing laptops, financial documents, etc and determined that we aren’t broke bums trying to hop the border into Canada. The agent apologized and explained that it obviously raised some questions and thanked us for patience.

Looking back it was pretty funny actually. Why were we nervous after all? We had absolutely nothing to be worried about, but having your things searched is definitely unsettling.

The two things I learned from the experience are just how nice Canadians are and more importantly, sometimes it’s just better to lie at the border! 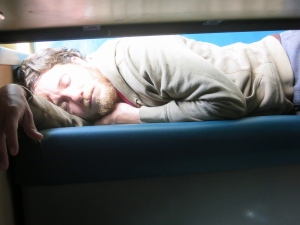 At least someone got some sleep on the ferry

One response to “Things Not to Say to a Border Agent”