Going to the funeral of someone you’ve never met is odd, but being included and particpating as “family” was even more peculiar.

Just as we were about to head north from our lovely workaway in Bagni di Lucca to Venice we got the call. Ben’s grandmother had passed away.

It didn’t come as a shock to anyone, and they had been expecting it for sometime. But knowing what’s coming does nothing to soften the blow that occurs when a soul escapes this world.

After discussing it in the brightly-lit upstairs bedroom that we’d made our own in Northern Tuscany, we bought two roundtrip flights from Rome to Boston. There really wasn’t any debate whether I’d join him, staying in Italy while he was mourning his loss wouldn’t be fun for either of us.

We said our goodbyes to the lovely British family in Bagni di Lucca and began the journey. After 20 hours of trains, planes, and a $200 car from Boston to Rhode Island (hello ripoff?!), we arrived at Ben’s aunt’s house in Hope Valley, Rhode Island.

The next few days were very different than I’d imagined they would be. As in any family there was the awkward and sometimes hilarious power struggles that always occur between family members who don’t see eye to eye. Being on the outside of these uncomfortable jousts was a welcome change.

This was a week of firsts.

As Ben introduced me as his fiancé for the first time I felt my face flush. Who is this grown up fiancé version of myself? Here we are jaunting around the world together, no house, no job, no kids, not a care in the world. But I’m someone’s fiancé. The implied commitment and level of planning that goes into the next step is shocking. All of a sudden this is real.

I met this side of Ben’s extended family for the first time. Immediately upon entering the house after our exhausting journey we were handed glasses of wine and sat down to a full Italian dinner.
After a full Catholic mass we stepped out of into the cool Rhode Island air. Every person that approached us flashed sad smiles and described her, Philomena,  with a handful of adjectives ranging from “a fun gal”, “barrel of laughs”, to my favorite “a hot ticket”. Story after story about her long life were told. Memories very different from any I have heard about my grandparents.

Phylomena and her daughter, Ben’s aunt Marilyn once picked up Ben from the airport with a bottle of wine and homemade pizza.

Just several years ago, at the ripe age of 87, Phylomena and Marilyn took a several week long trip around Italy. Many people I know from home would hesitate to do a trip like this in their 30’s, but 87?! This is my kind of lady!

Story after story of this woman, this senior woman, who in the later stages of her life continued to enjoy her life. These stories struck me as fascinating and completely foreign in contrast to the way my grandparents and even parents have lived their lives.

None of the adults, much less female figures, in my life can be described in that manner. Loving, loyal, cautious is much more the norm in my family than adventurous, fun, happy. Is an 80 year old’s life supposed to be fun?

At the reception we ate more greasy Italian food and I was poured my third glass of wine at 4:45, this resembled more of a party than a funeral. As Ben grabbed my arm and we began an impromptu dance, I looked around nervously. “It’s not appropriate to dance at a funeral” I told Ben as I pulled away. “Grammy would have wanted dancing” he said through wine stained lips.

So we danced at a funeral, drunk on wine at 4:45 on a Tuesday. And why not? If you don’t try to create happiness and joy in this life who really knows if you will ever truly have it. While I don’t condone funeral dancing in general, you get the point. Life is for celebrating and we were here to celebrate the mark she left on this earth.

No one can really truly say what happens next except for the grand force in the sky. Maybe we do come back in another form or go onto to something better. But what’s the best is now. Now will never happen again. Now is more important than the multitude of  “then’s” that exist in our lives. What if “then” never happens? Now is your decision and is up to you, do with it as you like.

Although I never met Phylomena, I will do my best to carry on her essence. Although life isn’t always easy, making the most of what you get is important. Growing up in a risk-averse polite Southern culture, I broke out and pursued a life that was on my own terms. My life will never be described as cookie cutter life. My life also won’t always be this perfect and free, but it is at this very moment. My now is perfect, I will enjoy my now. 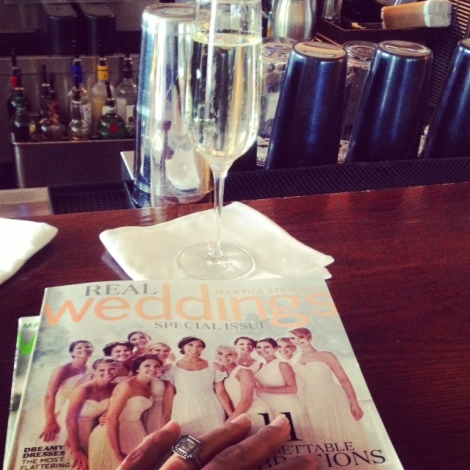 Bubbly and wedding brainstorming at The Ocean House in Watch Hill

Error: Twitter did not respond. Please wait a few minutes and refresh this page.